One of the clear differences between projects and non-project activities is the high level of uncertainty associated with the ability to meet a project’s goals, simply because each project is unique. Despite the fact that some projects are similar to each other, each project begins at a ‘low-point of certainty’ of the project’s ability to meet its goals. Fortunately, for most projects this point is relative to the project itself, not an absolute low point, since we usually manage projects in fields where we have previous experience. In new or innovative projects, where no prior experience exists, this ‘low-point of certainty’ is­ absolute. In such cases, it is crucial to utilize tighter planning and control systems—­­ones that are operated through smaller cycles. 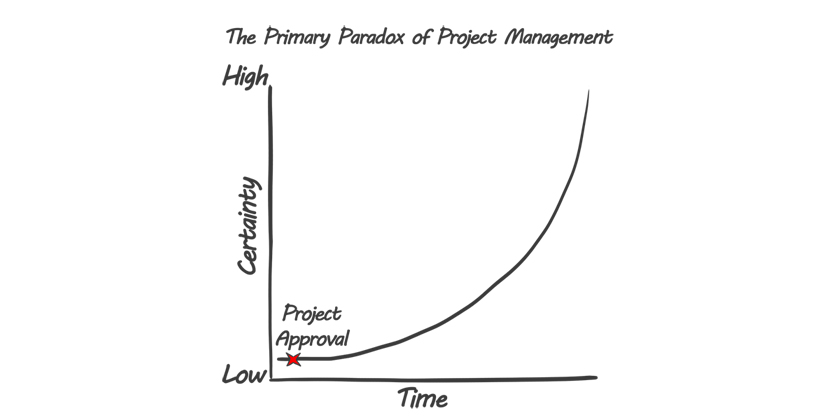 However, if the client were to ask the neighborhood cobbler to create this same pen and the cobbler were to agree to take on the project, then that would be a project with an absolute low-point of certainty, since he would be managing a project in an area where he has no experience at all.

This low level of certainty—and the low-point associated with it—is, in fact, the ‘Primary Paradox of Project Management’, since the most critical decisions for any project are made precisely at this low-point. Making these critical decisions means making a commitment to a given project on the one hand, while delaying other projects on the other hand. Alternatively, it could mean delaying a project that should have gotten the green light.

Continuing the example above, when the cobbler decides to commit to the pen design project, he should take into account that he will have to postpone a different project: designing work boots for some manufacturing plant, for example. This might be a mistake. Alternatively, the cobbler may choose to postpone this particular project due to the inherent risk it poses to him. However, it may turn out that the state of the shoe-making market is such that it would have been better for him to take the chance and branch into a new field.

There are no solutions for paradoxes. Therefore, it is the duty of the project team to design the project in the best way possible given the existing conditions, to maintain control over it, and to ensure that the relevant communication lines remain open.