Informal Communication in the Project

Informal communication is the sort of communication that is based on personal and social connections. It is not limited to the formal structure of the project. As such, it is usually coincidental, disorganized, undocumented and less business-like, and often includes an emotional element—sometimes a significant one. At the same time, it is fast, easily bridges professional hierarchical gaps and creates a situation in which the information streams in all directions.

Informal communication channels provide a rich infrastructure for transmitting messages within the project, as well as developing and improving teamwork and the performance of individual team members. However, in order to derive maximum benefit from these channels, the proper conditions for maintaining their existence and stability over the long haul should be developed.

Whether we like it or not, informal communication channels are ubiquitous. These channels contribute greatly to all messages, good and bad, transmitted over the life of a project, so they may as well be harnessed to the betterment of the project.

The number of informal communication channels in any given group can be calculated using the following formula: n*(n-1)/2  where represents the number of people in the group. 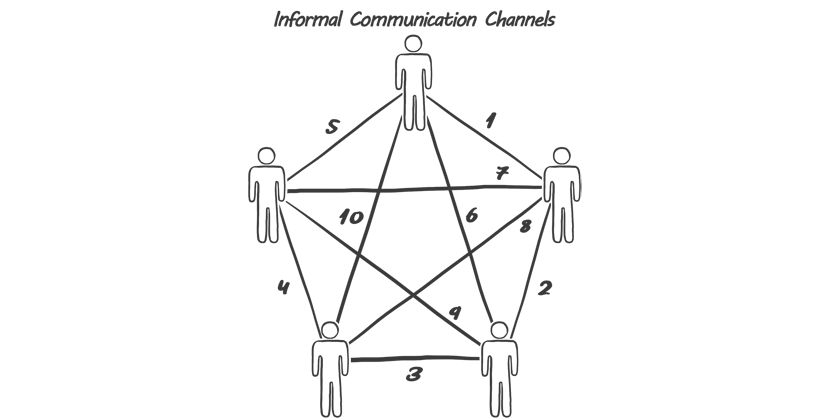 The more channels, the bigger becomes the challenge to manage the project’s communications effectively. Therefore, “planned, spontaneous” communication that will serve to minimize the interruptions inherent in informal communication on the one hand, but also increase the benefit it provides on the other should be organized.

The Participants in Informal Communication Channels

Informal communication occurs in all directions: vertical, horizontal, and diagonal, without any sort of hierarchical structure. Participants in such a network are tied to each other through friendship, mutual interest, subordination to the same supervisor, or involvement in the same task. Therefore, anyone at all can participate in such a communication channel. However, for these channels to be harnessed effectively, in a way that contributes to the project’s success, it is important to create fertile ground for the right groups to form and communicate in a way that is relevant to the project and its goals.

It is well known that heterogeneous work groups—ones made up of people from a variety of backgrounds and experiences with a variety of opinions—will arrive at better decisions than a single person or a homogenous group working on the same problem. Variety encourages people to expand their perception and integrate more information into the decision making process.

In every group there are always those who take a more dominant and central role. These people often play a large part in disseminating necessary information—not because of their formal status in the group but due to their personal and social talents as well as their access to information sources in the organization or project. These people should be identified and nurtured early on. Depending on the needs of the project, it might be worthwhile to guide this natural process by bringing them into the inner, more formal circles of the project.

Informal communications are largely spontaneous. Therefore, in order to ensure that such communication does indeed take place, adequate physical space where it can flourish should be provided. Significant architectural and spatial thought should be put into the team’s work and  rest areas. Other stakeholders and parties affected by the project should also have easy access to those work and rest areas.

Informal communication occurs continuously throughout the life of the project, without a defining framework even when it is “planned spontaneity”. Nonetheless, as part of this same effort to create opportunities for informal communication and to plan the “spontaneous” environment in which it can take place, the project manager should also set aside pre-defined calendar time dedicated to an investment in these informal ties—especially with particularly influential stakeholders. The project manager should check the impact/involvement map on a regular basis and periodically initiate contact with the stakeholders listed on the map.

The frequency at which informal communication takes place will vary from project to project and will depend on the level of involvement of the various project stakeholders. However, in order to ensure that it is not neglected, time dedicated solely to such communication should be set aside in the project manager’s calendar at the beginning, in the middle and at the end of the week. At the same time, the project manager should display a constant presence in the work area and express ongoing interest in what is happening around the project, rather than wait for the formal reports that are presented at various meetings.

PrevPreviousFormal Communication in the Project