As an experienced project manager, I have led many different projects in my life – both professional and personal. This project was different.

COVID-19 SPRINT is an Open Source program that recruited dozens of volunteers from across varied disciplines in an effort to find effective, inexpensive and rapid solutions to various medical challenges related to the corona epidemic. The program was backed by several well-known entities that supported and assisted a great deal in allocating HR resources, laboratories, equipment, tools, materials and more.

Daniel Zitter, my business partner, rose to the task of recruiting project managers for the program and I volunteered to lead one of these challenges. Everything happened fast. The phone call came late at night, a few days after our voluntary isolation had begun, and by morning I was fully in action.

The program was run in short rounds. In each round, there were a number of teams, each of which was responsible for one of the several significant threats in dealing with the corona virus. At the kickoff meeting, experts in emergency medicine and infection prevention presented us with a survey of the challenges that the entire world is currently facing, especially the upsetting example of Italy and the unbearable dilemmas they had to face.

During most of the session, I listened and tried to control the shortness of breath it was creating in me. I did not understand the language, and what I was able to understand was difficult to fathom. I did not understand how I had gotten into a situation where I was expected to lead a project in this program when it was evident that the ideal project manager would be one who also understands the content. Since I did not understand almost anything, it probably was not me. My anxiety grew and grew until it was my turn to speak. Somehow, I managed to revive myself and began to fill the role of project manager: I assigned preliminary tasks and scheduled a personal conversation with the project’s specialist physician, Dr. Sarit Hadar Shahroor – the most significant figure in our project.

Despite my anxiety, I was very quick to grasp the challenge facing our team.

Hospitalized corona patients ideally stay in negative pressure chambers because of the virus’s capability to infect through dispersion of droplets, which is amplified through coughing and non-invasive respiratory devices. In effect, due to concerns about dispersion into the surroundings and infection of the medical staff and since there are not enough negative pressure rooms to accommodate all the patients, the Israel Society of Critical Care Medicine (ISCCM) recommended reducing the use of non-invasive respiration in favor of invasive respiration methods. This is known to be the cause of the backup in treating patients all over the world, and, of course, also prolongs hospitalization and incurs additional risks for the patient.

Thus, our challenge was to seek alternative means of protection that would prevent infection of the medical teams caused by patients spreading the virus while on non-invasive respirators. In Italy, insulated helmets were used, but they created a great deal of stress in many patients, making it necessary to sedate them to be able to stand the treatment within the helmet.

Our solution was to develop a portable, reusable, personal negative pressure unit with a HEPA filter and a STEREONIZER to improve the surrounding air quality. The unit boasts a support framework to enable installation without external support, openings for pipes and vinyl gloves for nursing care on both sides of the unit, a special panel for emergency intubation, and an alarm system to alert in case of pressure changes. It sounds complicated but it was a simple solution, based on familiar, reliable off-the-shelf products that we adapted to suit the new need.

The excellent team from the Beit El Group joined with us and took on the design and development of the product, investing many resources that they donated to the cause, in the hope and belief that the product will save lives. 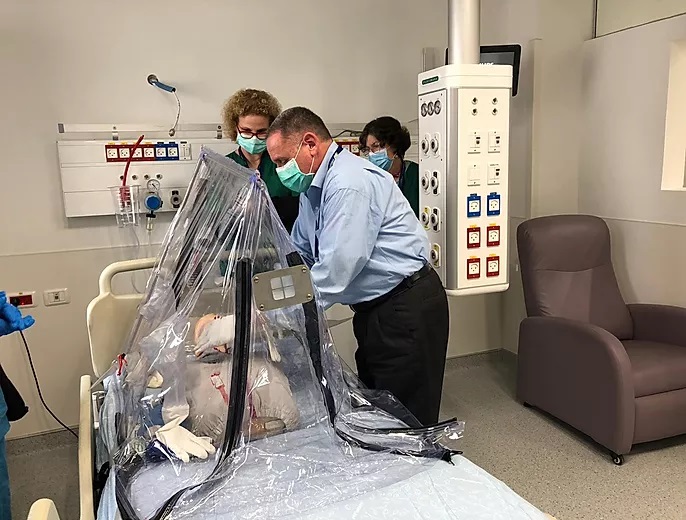 The benefits of this solution were many:

As an experienced project manager, a lecturer in the field, and one who has trained many people for the challenging role of project manager – whether professional or occasional – I observed this project, too, through “academic” eyes. I was amazed by the fact that the project was not only successful but transformed from an idea to a product – ready for mass production – in only two weeks’ time! It was clear to everyone involved that such a project would have taken as much as two years during normal times. The question is, why? Why was this project so successful while most projects fail?

So without getting involved in the issue of what exactly constitutes success or failure for a project, one can specify the main conditions for the success of any project:

All of these are applicable in the classic approach to project management, but that was not the case with this project. In fact, this project was conducted in conditions of chaos.

If we use Dave Snowden’s Cynefin Framework, which assists in “making sense of complexity in order to act”, one could argue that the classic approaches to project management operate in the complex, organized expanses in which it is possible to identify, analyze, and resolve the connections between cause and effect and to offer good practices for action. In contrast, the Agile approaches exist in the gap between the complex space and unorganized, complicated space where it is unclear what must be achieved and how, and it is impossible to identify the links between causes and results at the start – only in retrospect. Therefore, it is very difficult to commit to real planning. In this space, good practices for the various challenges do not exist, but rather new methods will emerge that may at some point become acceptable and recommended.

On the contrary, when a sudden crisis is imposed on us, we are thrown into a chaotic reality in which there is no order and exploration is irrelevant since it will not lead anywhere. Chaotic reality develops quickly and is temporary – at some point things begin to get organized and the chaos passes. In chaotic reality, we must first take action, and as a result of that action we must understand, respond and continue to shape our response until patterns begin to emerge and reality stops being chaotic and becomes complex instead. That is the point where innovation can grow. With time, it may traverse the spaces and even become simple. 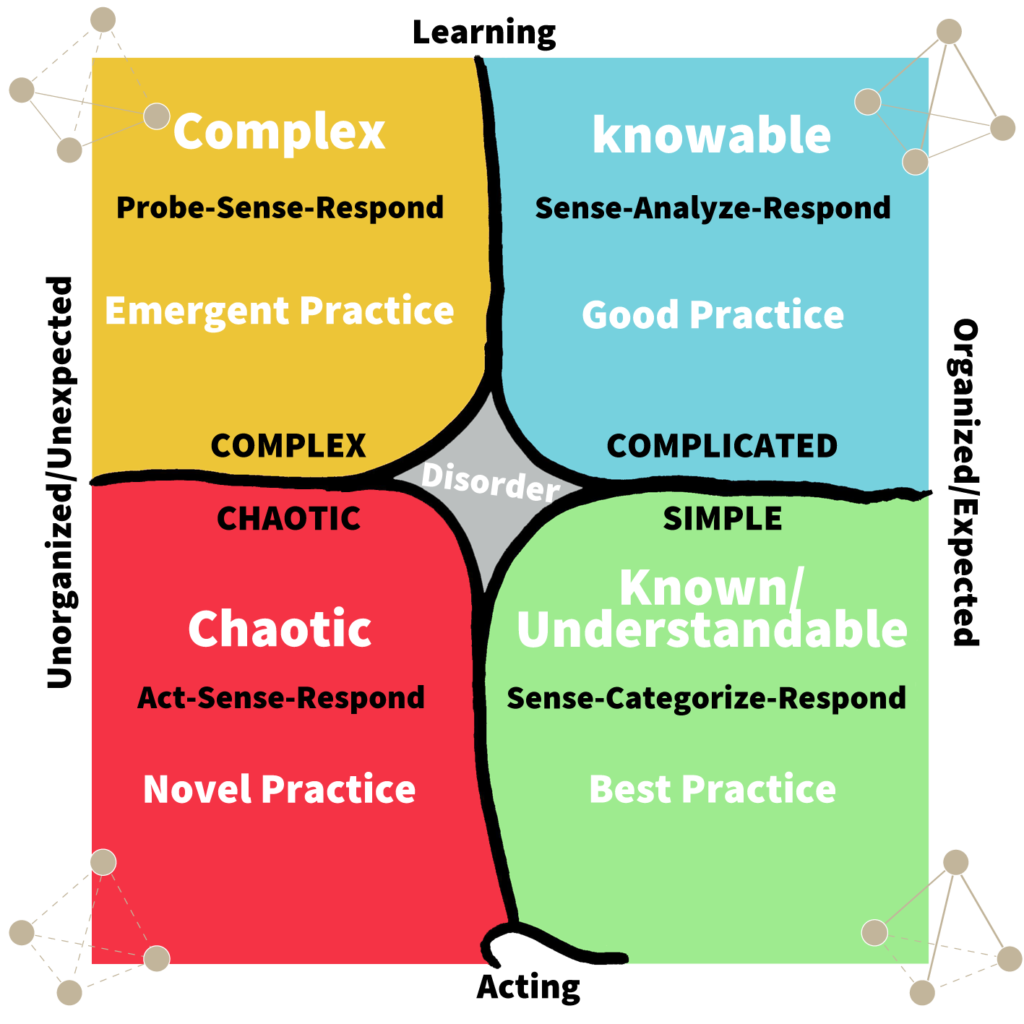 These were the conditions in which the COVID-19 SPRINT program was conducted.

Many entities became committed to the program and considerable resources were allocated to it. Quality manpower alongside an atmosphere of togetherness, commitment and synergy, as well as a lack of bureaucracy, combined to create the success of the project in these special conditions. The chaos is not over yet and these days are yet to be analyzed and studied with myriad tools, but in the context of our small project, we recorded one small success, accompanied by a sense of satisfaction and extraordinary achievement.

However, beyond this tiny “academic” analysis, I could not help but feel for this project. For the first two days, I regretted having agreed to take part in it because it weighed very heavily on me. But later, that feeling was replaced by a sense of mission and urgency and the harsh messages became a common language that I stopped thinking about. I was swept into work around the clock with inspiring people who all worked tirelessly towards the same goals.

Over the course of my professional career, I have managed projects to develop small and medium systems on a scale of tens of thousands to several hundred thousand dollars. I have managed development projects for both large and massive systems worth several millions to tens of millions. I have managed projects in various and diverse fields: high-tech, the service sector, manufacturing, and the energy sector. I have developed courses, games and products. I have advised and taught.

I had never before been a member of a “respiratory team”; I had not led the development of devices and equipment aimed to care for, protect and keep people alive. Never before did I have calendar appointments with titles like “Online Intensive Care, Remote Respiratory Room – Daily Meeting.” I had not received messages and emails with pictures of patients and resuscitation techniques. I had never worked screen to screen with teams of doctors, nurses, technicians and engineers – all of whom are trying to prepare for what’s next. The “next” that others do not yet even realize is coming. The “next” that will put all of humanity to a test it has never faced. Not like this.

If only all the efforts (or at least enough of them) would succeed and the “next” would not arrive. I hope that the product we developed will help to save lives, but that we will never have to use it again.